A couple of years ago, I went on my first, and so far only trip to Africa. I went on a trip to Kenya which was barely a week long, but worth every penny.

We flew into Nairobi, and drove out via the Rift Valley to our first hotel, at Lake Elementaita. The Rift Valley is perhaps one of the most beautiful places I have ever seen, rolling African countryside stretching as far as the eye can see.

It was certainly an amazing introduction to Kenya. The road we drove along is a busy road, winding its way down to the floor of the valley, with lookouts overlooking the valley for visitors to stop and admire the views. These stops also have locals positioned in them, trying to make a living selling goods, and food and drink. I didn’t buy anything here, although the vendors were definitely persistent, but the views more than made up for the hard sell though.

Lake Elementaita was beautiful. We were staying in what had once been the house of a white settler, built about 100 years ago. The hotel complex has the main building, which is where we ate our meals and has gorgeous views of the countryside from the main veranda, and a pool – very welcome after a hot day out on a safari drive! The main accommodation is in a number of small houses scattered around the grounds.

On  our first evening there we went for a guided walk around the surrounding land and down to the lake. Sadly, I had a pounding headache and couldn’t fully appreciate it, but it was a lovely walk. We saw lots of birds, and of course the lake and plants/trees.

The next day, (headache thankfully gone) we went on our first safari drive. This was around Lake Nakuru, which was quite close to where we staying. We spent the whole day there, driving around looking for wildlife and the animals. We saw our first giraffes here which was very exciting. They are such graceful creatures, strolling round the open countryside, seemingly without a care in the world. 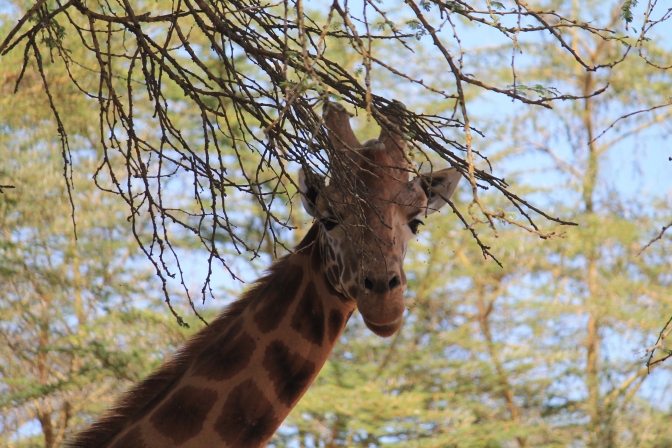 We saw numerous zebras, impala, gazelle, and other antelope, all just going about their business, wandering around, finding food. We even, at a distance saw a couple of rhino. Sadly, we didn’t see any elephants or lions here – our guides said this park is just too small for them. We also saw dozens of monkeys, some of which looked like they wanted to join our little group and get in the minibuses with us! I definitely kept my eye on them. 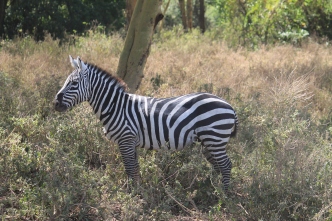 The main attraction of Lake Nakuru is the birds. And we saw lots of birds, especially down by the lake itself. The highlight was the flamingos, although sadly the view wasn’t as pink as I would have liked! But, we saw plenty of other birds too, most of which I now can’t name.

After 2 nights at Lake Elementaita we moved on, to the Masai Mara. Here we were glamping, staying in big, permanent tents, which had en-suite bathrooms and very comfy double beds. 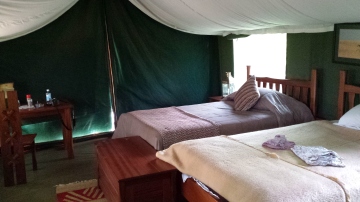 During our stay here we went on a number of safari drives, and saw as much of the countryside and as many animals as we could. One morning a number of us went on a hot air balloon ride, which was expensive but we had some amazing views of the countryside at sunrise. The highlight of the balloon ride was what came afterwards – our first lions! We were driving to meet the rest of the group, after a lovely freshly cooked breakfast eaten out in the open air, and our driver had just told us he always finds lions, and there they were!  Lions! Basking in the sun.

Over the course of the next few days we would see several more lions, both male and female of varying ages and none of them were ever bothered by us. They just sat and watched us, sometimes moving into the shade of the minibuses to escape the heat. They looked so cuddly! The only time they didn’t like the human audience was when they had just killed a cow, and they wanted to eat it in peace and quiet. Another time we saw 2 females rolling around in the dust, just like domesticated small cats do.

One day we were lucky enough to see a family of cheetahs, a mother and her five cubs. We didn’t get too close to them, but we could see the cubs playing just like kittens do, chasing each other and pouncing on each other. Our guides told us it was rare to see a mother with so many cubs. A few months later, this family featured on David Attenborough’s Africa TV series. 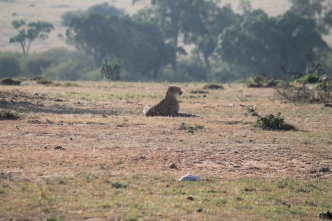 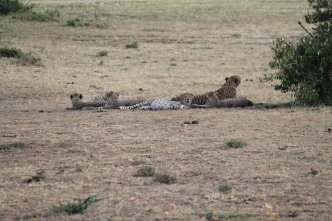 We also saw herds of elephants, in big family groups. These animals were slightly bothered by us, and were very protective of the young, always trying to keep them in the middle of the group away from us. This did make it hard to take photos of the babies, some of which were very small, but it was so lovely to see that caring nurturing side of the these gorgeous giants. 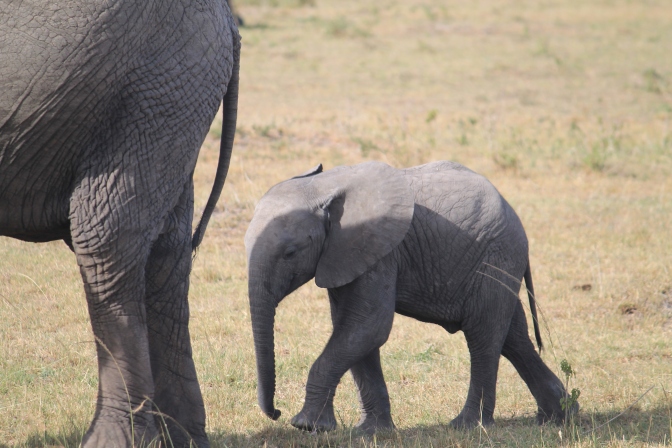 This holiday is definitely one of my favourite ever. The countryside was stunning, and it was amazing to see the animals in their natural environment, and not in cages/enclosures in zoos. I know for a lot of people the only way to see these animals is at the zoo, but having see them in the open, wandering across huge areas, mingling with other animals I’m not sure a zoo will ever be the same for me again. It has definitely whetted my appetite for more, and I will definitely return to Africa one day…

One thought on “Kenya”