NB I wrote this several days ago, but crappy hotel Wi-Fi has prevented me from posting it sooner.

So, as I write this I’m in Flam, on the Aurlandsfjord in Norway. I’m sitting on the balcony of my somewhat expensive apartment looking at what makes it all worthwhile – the view of the fjord. Well, trying to look at the view anyway as it’s a pretty miserable day, pouring with rain and foggy. There is also a great big cruise ship blocking some of the view. I’m hoping it’s going soon but I actually have no idea.

I’ve been in Norway for a few days now, in Oslo which I did start writing about but haven’t finished. Watch this space! This morning I boarded the train for the first leg of Norway in a Nutshell, which is an unofficial tour from Oslo to Bergen which Fjord Tours will book for you – at some cost I might add. It’s actually a highly popular way of getting across the country on a set itinerary via the train and a fjord cruise and a bus and the Flam Railway. It is possible to book it all yourself and save money but I didn’t do that. I paid them to do it, all on online.

This morning I boarded the train in Oslo with dozens of other tourists, and our journey began. The train quickly left Oslo behind, and we were soon out into the beautiful Norwegian countryside. At first, it was high mountains climbing above the train, covered in lush greenery – big pine trees, plants and bushes. At one point we travelled past a big  lake, at other times we went past streams and rivers gushing over the rocks, almost hidden in the deep forest. 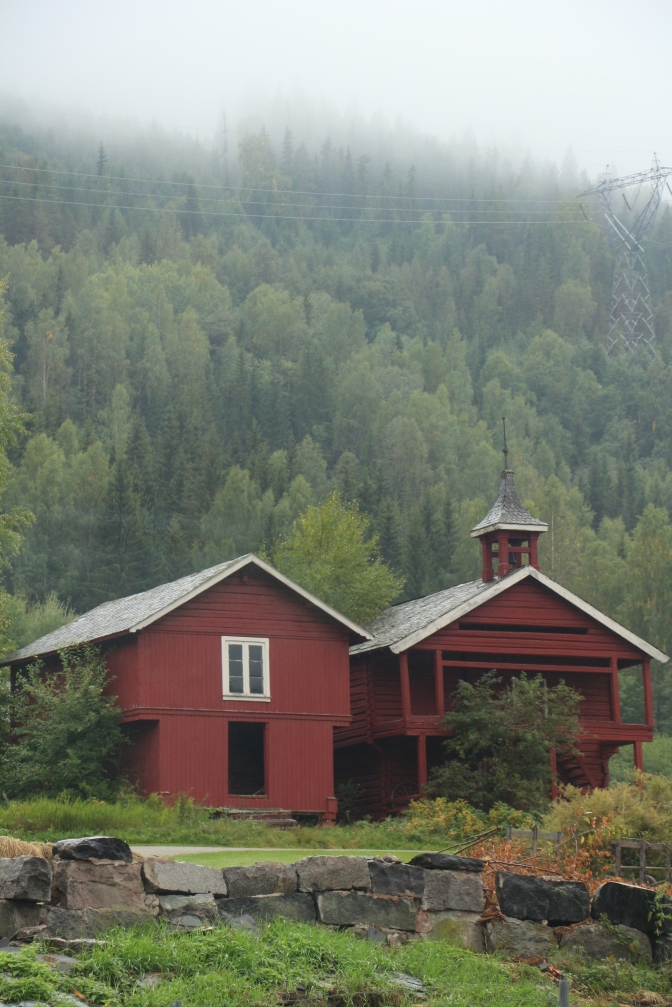 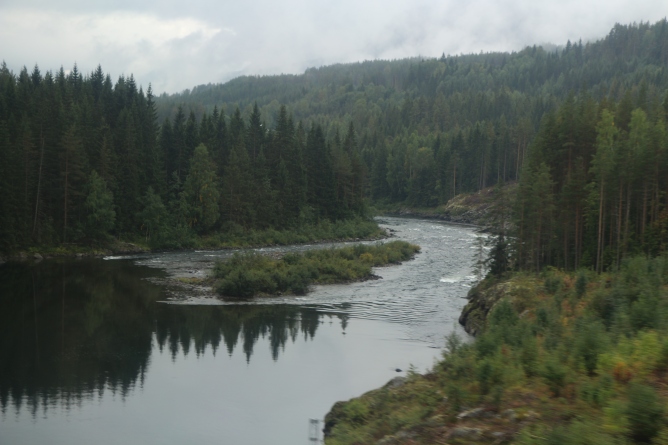 As we travelled we climbed in altitude, to over 1000m above sea level. By this point the scenery had changed considerably. Gone was the forest, replaced by an almost barren scene of rocks, devoid of all but a few short trees and moss on the ground. It was quite desolate, “stark” was the word I overheard the couple behind me say. It was also raining by this point, and misty, the fog obscuring the views at times. There was even snow laying on the not too distant hills. The info boards on the train were saying it was only 9C – 2 days ago in Oslo it was over 20C!

Eventually we arrived in Myrdal, where we left the Bergen train, and joined the Flamsbana. On the Norway in a Nutshell tour you are meant to have about half an hour in Myrdal, but the train was late, so we had a mad dash across the platform onto the train. The Flamsbana is meant to be one of the most beautiful train journeys in the world, but you do need a decent seat on the train to enjoy it, and sadly I didn’t have the best seat. It is actually a real train route, going from A to B, but most people who use it these days are tourists, doing a round trip. Those of us doing the Norway in a Nutshell trip just do the second bit, down the mountain back to Flam, and when we all got on, most of the seats were already occupied. I sat in the first seat I saw, which was near a window which opens. What this meant was there was a bar across the view. And there was an elderly couple sat by the window. Add in the fog, and it was a bit hidden from view. But, I loved what I saw. The lush green trees returned as we descended, with the addition of waterfalls, and views down the deep mountainsides. It was all so beautiful. 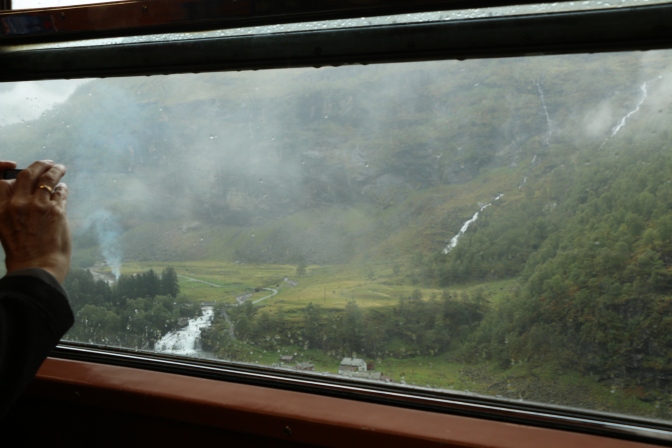 After about an hour we arrived in Flam. I am so excited to be here! This is definitely the highlight of the trip so far. I had hoped for bright sunshine, but to be honest the overcast skies and the mist on the mountainsides is creating a dark brooding atmosphere which is stunning. I’ve not done much, just wander around and take in the views – in the rain, which is falling steadily. Tomorrow I’m going on a short trip to a lookout over the fjord.  Fingers crossed for better weather… 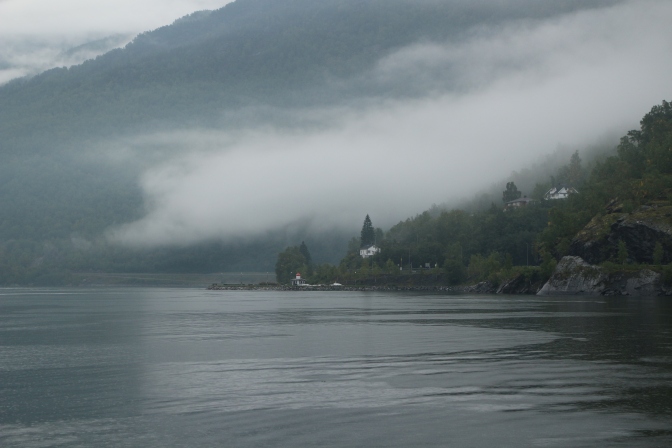 3 thoughts on “Norway in a Nutshell part 1, and Flam”