So, when I started writing this blog post I was in Norway, on holiday. My plan had been to blog regularly while I was away. But, that plan quickly fell apart, as I was too busy actually having my holiday. In the end, I only managed 2 posts while I was away, both about my 24hrs in Flam Norway in a Nutshell part 1, and Flam  and Flam, and Norway in a Nutshell part 2. So, now I’m home, and back at work, I’m going to write about the rest of the trip, starting with my unfinished post about Oslo and the Bygdoy peninsula.

It actually wasn’t my first trip to Scandinavia, I have been before, to Finland many years ago when I was about 18 – I had a penfriend there who I met a couple of times, and Iceland a few years ago (as blogged about here in Iceland ), but never been to Norway or Sweden before. The whole trip was over 2 weeks, and finished in Stockholm.

The first couple of days I was in Oslo, I went to the Bygdoy peninsula to see 5 museums which was located there. To get there you either go by bus, or on the very scenic and quick ferry. It takes about 10 minutes to cross the water, and the views are gorgeous. Oslo is actually built on a fjord, not a big dramatic fjord like some, but it is a fjord, so the views are beautiful as you travel around on a boat. 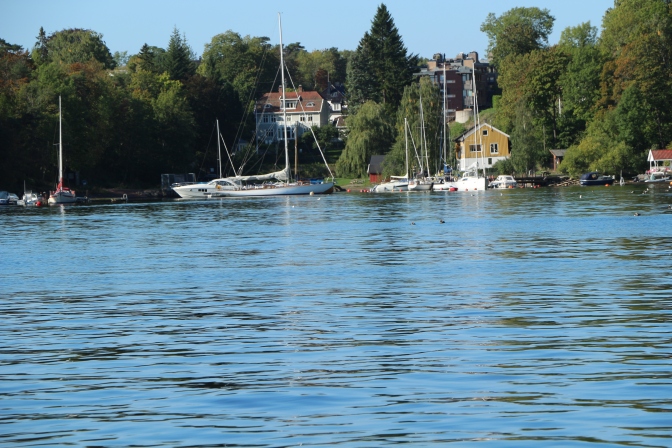 The five museums on the Bygdoy peninsula include the Norwegian Folk Museum and a Viking Museum, which has 3 Viking ships in it. The folk museum was interesting, as it has a large number of wooden log cabins/buildings from various farming communities around the country, many of which you can go in, to get a feel for how the farmers lived back in the day. Most of these buildings were quite small, and only had one or 2 rooms, so no privacy, but some of them had intricate carvings on the walls and around the doors, and some beautiful big old pieces of furniture. There is also a stave church which dates from the 1100’s, and has several different ornate roofs, and more carvings on the walls and pillars around the building.

In addition to the farm buildings, there is a small area set aside for town life, with an apartment block, and a bank, and a few other buildings. The apartment block was saved from demolition a few years ago for the museum, and all the apartments are done up as they would have been at various points in the building’s history. So, one of them is decorated for the early 20th century, all antique furniture and no mod-cons, and nearby is an apartment out of the 1970’s, complete with TV and record player. A bit of a mix but still interesting to see.

The Viking museum was mostly about the boats, which were used a burial boats. They were found by chance I think, and were successfully dug up a number of years ago. The boats and their contents such as shoes and jewellery are on display for visitors to see, and give an insight into Viking life – and death I guess. 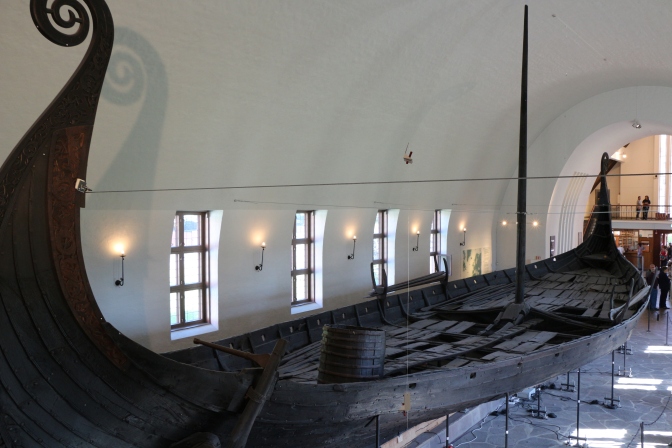 From there I fancied seeing the sea, so I headed down to Huk beach, which took about 30 minutes to walk to. Some of it a actually a nudist beach, but if you look the other way – literally – the whole area has many little beaches and coves, with lots of rocks for scrambling on. It was absolutely stunning! The sun was shining, the sky was blue and the water was lovely and clear, and the views of the fjord glorious. It was a lovely couple of hours. 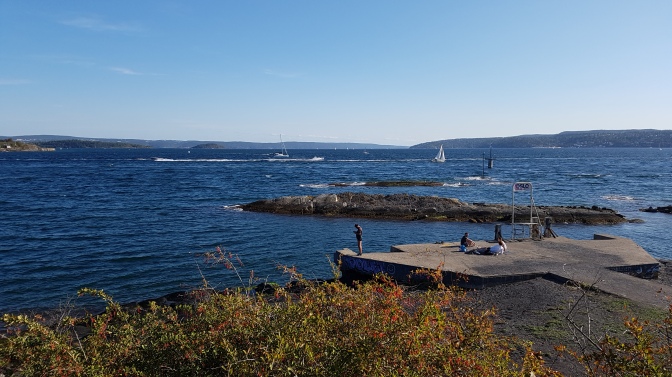 The next day, I returned to the peninsula to see 2 more of the museums. The first one I went to the Fram Museum. The Fram was a polar ship, used by Norwegian explorers to explore both poles in the late 19th century and early 20th century. The museum details all the many trips to explore the poles over the years, both successful and unsuccessful. That does get a bit boring – slight information overload, as there is board after board with lots of info on them, and some of them get repeated elsewhere in the museum. The highlight of the museum is the 2 polar ships on display, the Fram and the Gjoa. The Gjoa was used to cross the Northwest passage, on an expedition which ended in 1906, by a group of explorers including Roald Amundsen. The Fram was used in several expeditions to the North Pole by various explorers, and then Amundsen used it to go to the South Pole. Both ships are now in the Fram Museum, and visitors can go on both boats.

The Gjoa is actually quite small with limited space for anything. Add in a few other people and conditions would have been very cosy indeed. I’m not sure I’d like to spend too much time on it.

The Fram, on the other hand is much bigger, much more spacious. It had a several cabins for the men on board, and a kitchen – sorry galley! – and some sort of living room where they could relax. And there was space for their supplies and all the scientific equipment they needed. There is also a big deck for walking on, admiring the Arctic views. The ceiling of the museum above the Fram has images projected onto it of the Arctic scenery, both of the icebergs during the day and the stars at the night. You can sit or stand and just admire the scenery passing by as you sail through the Arctic…(BTW my dream is to go the Arctic)

After that, I went to the Norwegian Maritime Museum. This was information overload, all about boats, unsurprisingly. Some of it was interesting, and there are lots of boats to look at, but it wasn’t the highlight of my day.

And that is my two days on the Bygdoy Peninsula. After that I went into the city centre and had a walk along Karl Johan’s Gate, which is the main street in Oslo, and lined with big gorgeous buildings, and ends up at the Royal Palace, the grounds of which are open to the public to have a walk through. In the late summer, early evening sun it was a lovely end to the day.