I’ve just returned from another trip to New York. Some people never go back to somewhere they’ve been before, but I do – especially New York, where there is so much to see and do. My aim for this trip to see some new places/things. With this in mind, I stayed in Williamsburg, with a view to seeing more of Brooklyn, and that side of the river. Things did not go quite to plan. The lure of Manhattan, and the buzz of the big vibrant city was too great, and in the end I spent only one day in Brooklyn! I will write about that one day in Brooklyn at some point, but for now, I’m going to talk about my last day in New York, which was spent mostly at the New York Public Library.

One of my favourite films is The Day after Tomorrow – who doesn’t love a good disaster movie? And this one has it all – high drama, romance, stunning scenery (even if half of it is CGI). It might be cheesy, and has been criticised by both movie critics and climate experts, but I love it! And since seeing it I have wanted to see the inside of the New York Public Library. The appeal of seeing so many books also helped. So, that’s what I did last Thursday, before my evening flight home.

I had found out before going to New York that they do free guided tours of the library, at 11am and 2pm, and my plan was to go on the 11am tour. The internet was somewhat vague about the best time to arrive – you can’t book it, and they don’t make a list of people who have expressed an interest in going. You just turn up and hope there is room for you. With this in mind, I arrived at the library nice and early – so early it wasn’t even open. Not to worry, it was a glorious sunny day – everyday (except one) last week was glorious and sunny if very cold at times, so I had a wander round the block, around Bryant Park behind the library, and sat on the steps leading up the library doors, enjoying the sunshine.

I went in at about 10.30, and spoke to someone who said I could go the next tour – yay – and suggested while I waited that I go to the education centre, where they have a small auditorium showing a 20 minute film, which was about to start, all about the library. So I did just that. It was actually quite interesting. It tells you briefly about the history of the building, such as the fact that there used to be a reservoir there. It also talks about, and shows you some of the artefacts they have there. Although it is a library, there is nothing there that the public can take away/borrow – it’s all research and artefacts. And the artefacts include authors’ copies of books, with their scribblings and edits handwritten in them, maps and charts from decades ago, if not centuries ago, some handwritten and hand-coloured. There are journals and publications from all over the world, some from huge corporations, others from smaller niche markets. It was a very interesting short film.

Then it was time to join the tour. It started in the Astor Hall, which is the main foyer of the building. This is where the marble is most obvious as it’s everywhere – the walls, the floor, the staircases. The Astor Hall was stunning! A truly glorious, magnificent place to spend some time. 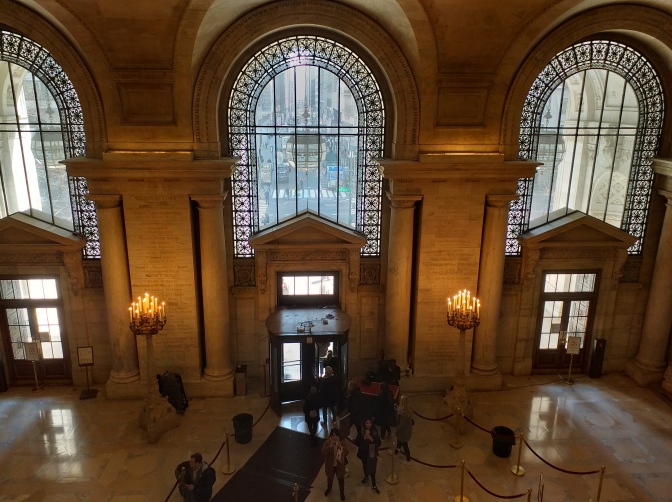 The tour was led by the lovely Hilda, who was knowledgeable and well informed, and clearly loved the library. She told us about the history of the library, such as how and when it was built, and how much marble there is in the building – lots! It’s one of the biggest all-marble buildings in the world. It turns out some of the stones from the reservoir were used in the lower levels. Hilda informed us that the education centre I had just been in was a later addition, built in a former courtyard, which means some walls which were external are now internal walls.

She took us to several rooms, and told us the history of the room, such as which benefactors had helped contribute to the room or where the furniture had come from, and of course what was kept in the room/what it was used for. We didn’t go in all the rooms, but the ones we saw were very impressive – high, ornate ceilings, big paintings on the wall, lots of elegant detail everywhere. 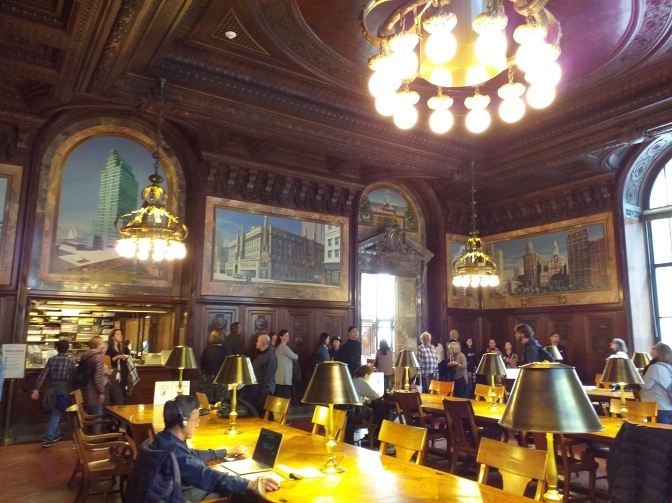 The two highlights are the McGraw Rotunda, a big open space on the third floor, with high walls, and more ornate ceilings. The walls have several murals on them, which were painted in the 1930’s as part of a New Deal project designed by FDR (the president in the 1930’s) to find work for the masses of unemployed during the Depression – in this case an artist called Edward Lanning. The paintings depict the history of the written word. In addition to the wall murals, there is more artwork on the ceiling.

The other highlight was the main reading room – the Rose Reading Room – more elegant marble walls, more gorgeous ceiling artwork, big windows letting in lots of light – it was deliberately built at the top of the building to let in the light – and to keep the main reading room away from the noise of the New York streets when the windows were open. And of course, the books. Hundreds and hundreds of books. I am a big reader, and I was awestruck over the sight of so many books. I was in heaven for the few moments I was in there. 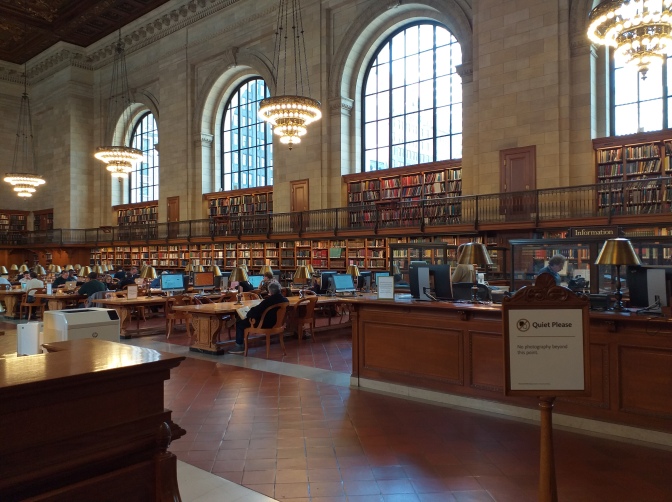 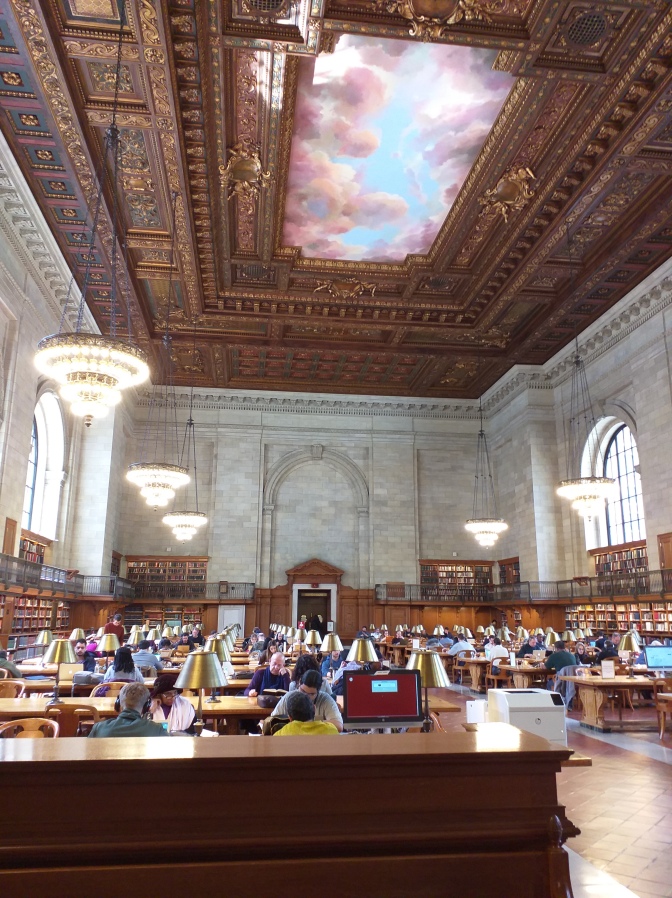 That was pretty much it for the tour. I spent some more time inside the library, taking more photos, soaking it all in. It really is a remarkable place to be, and I can highly recommend that you go. You don’t even need to go on a tour – there were plenty of people there, clearly tourists doing their own thing.

The last thing I did was go the children’s centre on the bottom floor, to see some old friends. In a glass cabinet, in the kiddie library, are the original Winnie-the-Pooh and friends – Eeyore, Kanga and Roo, and Tigger. I grew up watching Winnie-the-Pooh films, as I guess most people do, and I have fond memories of them, so visiting them was an important part of my day.

After that, I left the library and spent a couple of hours wandering around Manhattan, soaking up the sights and sounds of  a busy New York spring day. I did some shopping, I returned to Bryant Park to eat some food. I just enjoyed being in one my favourite cities in the world. 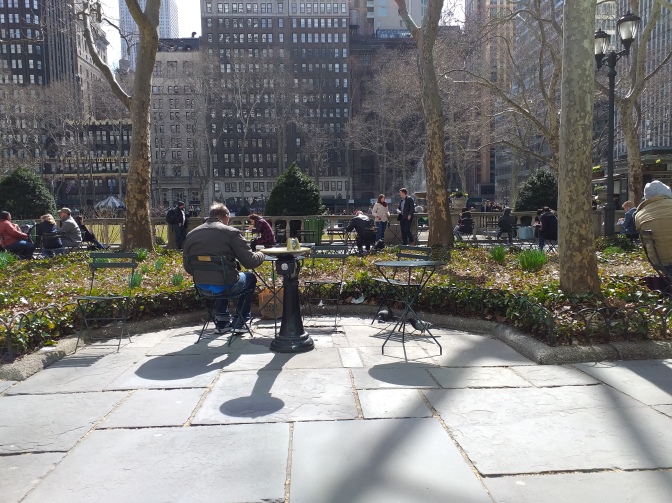