The main reason for our stay in Xi’an was the Terracotta Army, which is a couple of hours away from the city. It is a must see on most people’s list when they visit China, and is definitely a highlight of my trip.

The basic history is that an Emperor, the Emperor Qin Shi Huang (he was actually the first Emperor, and he also built the Great Wall), spent years building this army prior to his death so that he would have protection in the afterlife. The soldiers are intricately detailed, even down to patterns on the underneath of their shoes if they are kneeling. All them are different too – there are no twins in this army. When he died, he was buried in the mausoleum with his army, the site was covered up, and mostly forgotten about. It was discovered by chance by some farmers in 1974 when 4 local farmers were digging a well, and they found the broken fragments of a soldier. They informed local officials which  led to archaeologists coming to the site, and beginning the mammoth, and still ongoing task of excavating the army.

Today, there are 3 pits visitors can visit. Pit 1 is the famous one, the iconic image of the huge pit with 100’s of soldiers standing in rows. Pits 2 and 3 are smaller, and have cavalry and infantry units and chariots in them (pit 2) and high ranking officers are in pit 3. The Emperor’s mausoleum, where he is actually buried, has yet to be excavated due the high levels of mercury which was used during the final construction. As I said excavation  is still ongoing, and preservation will on ongoing for even longer – the soldiers are generally broken into pieces so need to be reconstructed, and the paint they all had on when first built peels and comes off within minutes of exposure to the air. Pit 1 actually has the hospital at the back, where all this work goes on.

Ok, enough writing/reading/talking. Here are some of my photos from that day. 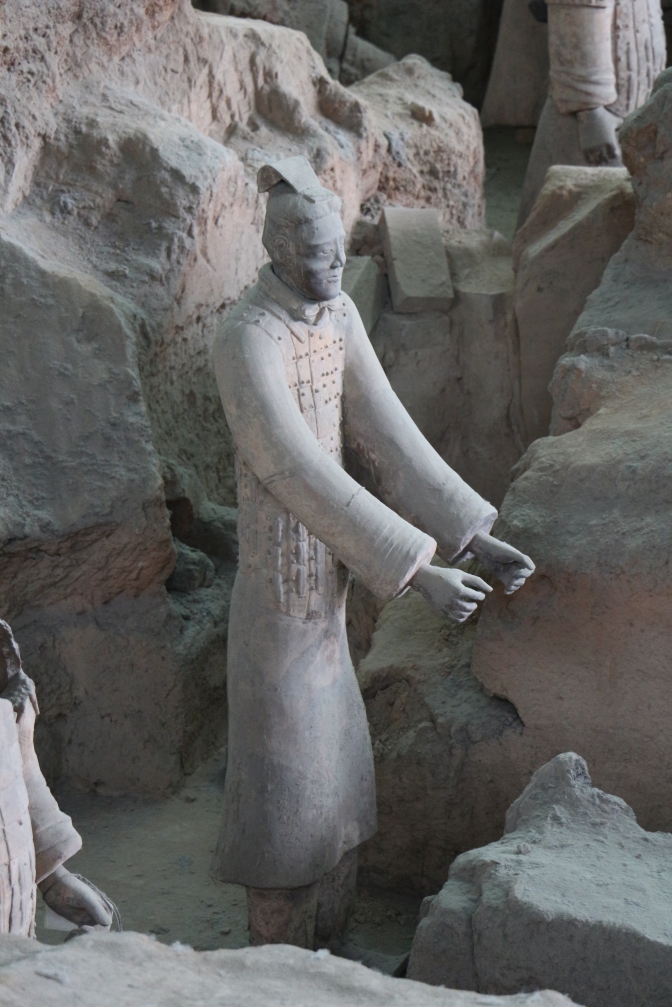 So, that’s it’s for today. Hope you enjoyed my little photo essay of the Terracotta Army. Thanks for reading.

2 thoughts on “The Terracotta Army”