Today we left the beaches, but not the coast, behind us as we headed for Split and Trogir.
After checking into the hotel in Split, we headed to Trogir on a public bus. A rather rundown bus with missing seats and no air conditioning…
Trogir was underwhelming. It is advertised as lovely, a UNESCO World Heritage site, but for some reason I wasn’t taken with it. We had a nice breakfast of omelette and chips, as recommended by Louise, and then we had a wander around the town. We were only meant to be there for a morning, which was for me was long enough. Architecturally, it was similar to places such as Hvar, Korcula and Dubrovnik, all of which I really liked, but… I’m not sure what the problem was but I wasn’t keen on Trogir.

In the afternoon, we went to Diocletian’s Palace in Split. Split itself looks a bit rundown, at least from what I saw, but we were there to see the Palace. Diocletian’s Palace was built by Diocletian, a Roman Emperor in about 248AD. After he retired and then vacated the palace the local people moved in. Over the following centuries it was used by them to live in, and they reconfigured it to accommodate homes and shops, and it now bares little resemblance to the Roman palace it once was. It was certainly impressive, full of narrow streets and alleyways, and grand buildings. Some of it well maintained, and being used today as shops and cafes. Some of it is less well maintained, but no less interesting to look at. It was well worth the visit. 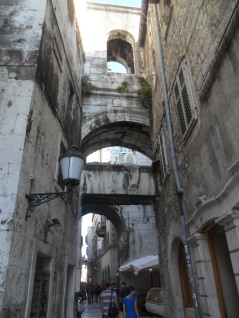 One thought on “Trogir and Split”