Today, we’re going to take a trip back in time. Back to 1995, to a time before skinny jeans and UGG boots, before Starbucks took over the world, and to time when the internet was in its infancy, and wi-fi unheard of. To a pre 9/11 world, and a pre Brexit world. To a world that had barely heard of a gap year, and travel blogs were handwritten travel journals. And a mobile phone was probably still the size of a brick, and used only to make phone calls. And social media did not exist.

During that year, I kept a travel journal (as previously mentioned in my first blog post), filling several note books, and recorded pretty much eveything I did  – the people I met (mostly other au-pairs),the things I did, and the places I travelled to. They now live safely in my wardrobe, and are a unique memento of one of the most amzing years of my life. 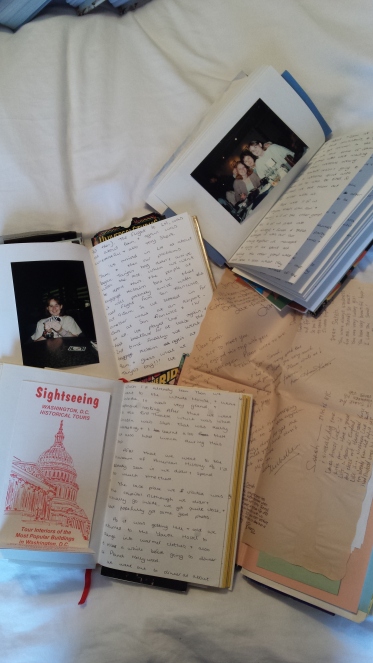 And I am going to share some of the memories with you, my lucky readers.

Not an exciting start to my journal, but that was the first sentence I wrote (don’t worry – I’m not going to copy the whole thing here). But, that was the start of the adventure!

I went out to America on an organised year with a company (instead of independently), with about 250 other au-pairs from all over Europe, and as part of the package we had 3 days orientation in New York before going out to the families we were going to be working for. Those 3 days in New York were amazing. We had lectures, not sure what on now – I think life in America, and childcare tips, and possibly some basic first aid – but mostly we wanted to see New York – in fact on Feb 10th I wrote “the orientation lectures were pretty boring and by today were seriously interrupting our sightseeing”. I was sharing a room with 2 other au-pairs, Vicky, who I don’t think I heard from again, and Jeanette whom I am am still in touch with 21 years later. And we did manage to see some of the city that never sleeps – we saw Central Park in the snow, The Empire State Building (amazing views, but so cold and windy 2 sides of the observation deck were closed), Phantom of the Opera, the lights of Manhattan when we first arrived.

From New York I went to a family in Buffalo, but sadly that didn’t work out, and I quickly found myself with another family in Philadelphia. Not before I’d seen Niagara Falls though, which were impressive in the snow.

Philadelphia used to be the capital of America, and it’s where the Declaration of Independence and The Constitution were signed, and is home to Independence Hall and The Liberty Bell. The history buff in me was very happy in this historic city, with its old buildings and at times narrow streets. I was lucky enough to live in centre city, just a few minutes walk from South Street, and Independence Hall, and the main shopping mall/area.

The family I worked for had 3 children, who were 2yrs, 8yrs and 10yrs when I arrived, and they were great kids, and I had a lot a fun with them and they definitely helped make my year so enjoyable. But, this blog isn’t about the kids – it’s about my travels.

That year I made 2 trips to the US capital, Washington DC, one in the spring and the other in the autumn. Between the 2 visits, I managed to see quite a lot – the Vietnam Veteran’s Memorial, Lincolm Memorial, Arlington Cemetry, Washington Monument, several museums such as the Holocaust Museum – very sobering – The Air and Space Museum, Musuem of American History – I’ve seen Dorethy’s shoes from The Wizard of Oz, and the Air and Space Museum. On the second trip there, we did something tourists can’t do anymore – go in and visit The White House on a tour. Sadly, I have no photos, probably because you weren’t allowed to take any – I remember trying to take one on the steps outside and being told off by security. My journal entry states “It was very grand, and expensive looking” – doesn’t really say much, does it? And at this point I can’t really remember much, except that I have been inside The White House.

During my year in America, I also went to California for about a week with one of the other au-pairs who I had made friends with, Tanja. Our first stop was Los Angeles, where we stayed in a youth hostel in Santa Monica, and which according to my journal was only a couple of blocks from the beach.

During our time in LA, we went to Universal Studios with its big rides such as the ET ride, Back to the Future, the back lot tour, Back Draft, and also Paramount Studios, which was very different to Universal – “Universal Studios was more like a theme park,  like Disney – it was very glitzy and glamorous…Paramount however was more down-to-earth…the tour was a side-line for those who interested in seeing it”. I definitely enjoyed both, and would recommend both. We also went on a tour of LA, and saw Rodeo Drive, the Hollywood sign, several homes of the stars, and spent some time on the beach. Our other stop in California was San Fransisco. While in San Fransisco, we went to The Goldern Gate Bridge, which apparently “is nice. It’s huge!”, and walked part of the way along, and spent a lot of time around Fisherman’s Wharf, shopping. 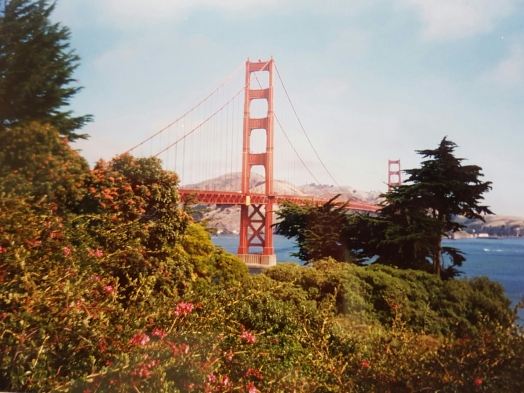 We weren’t able to to go Alcatraz as you had to book tickets in advance and there weren’t any available until after we left – no internet for booking in advance in those days! We also saw the Crookedest Street in the world, and also saw a cable car, a typical San Fransisco sight.

That year, I also went to Atlantic City, in New Jersey a couple of times, where we once saw Bruce Willis and Demi Moore who were still married at the time, and on a holiday with the family to the Hamptons, which I didn’t realise at the time was where the rich and famous like to live, and party – although I did see Chevy Chase in the pool we went swimming in a few times that week. Myself and the other au-pairs also went on a camping trip to the Poconos, which started off well, but ended slightly wet as it started raining, but we had a good time telling tales around the camp fire and sunbathing by the lake. Strangely, now I look back, I never returned to New York City until right at the end of my time there, although it really isn’t that far from Philadelphia.

I ended the year with 3 week trip across America, from LA to New York, but more on that another time…