So, at the end of my 12 months working in Philadelphia, I had an extra month in the US to do some travelling. I went on an organised group trip, with a company called Trek America. They run trips, in minibuses, all over the USA – they were founded in 1972, and still exist. A lot of the trips are camping trips, and even though I travelled with them in February we camped out most nights.

I was travelling with a friend from Philly, Jo, who was also an au-pair at the end of her year. The rest of the group was  mostly Japanese, along with a couple of other au-pairs and 2 Aussies – and with one exception we were all girls. Our tour leader and bus driver was an American guy called John, who was very good, and very well informed about everywhere we went.

We departed from LA – after spending a day at Disneyland  – on Feb 10th 1996, and headed for the desert.

We spent the next couple of weeks travelling around the desert seeing some places I probably never thought I would see, such as Death Valley, Monument Valley and The Grand Canyon. 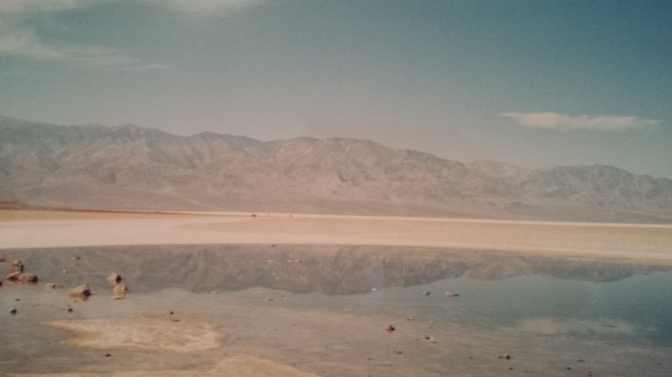 At Monument Valley, some of us went for a jeep ride with a Navajo Native American, Ed, who drove us around showing us the different rock formations, and at one point he played a Native American drum and sang us a couple of Navajo songs. “Definitely enjoyable!”

The Grand Canyon was “awe-inspiring, very beautiful. However, the park was too commercialised for me…too many paths and restaurants etc”. It was definitely worth visiting though, and I enjoyed the plane ride I went on over the canyon.

We also saw places I’d never heard of before, such as Zion National Park – now one of my favourite places in the world, “the scenery was incredible, some of the best anywhere” – Panamint Valley, Trona Pinnacles. We even had a brief stop at a ghost town, long since abandoned for now unknown reasons.

Most nights we camped out, as even in February it doesn’t get that cold in that part of America. The tents were 2-man tents, and we had to put the tents up in the evening, and take them down in the morning – John helped as needed, especially the first couple of nights, but basically we had to do it ourselves. Dinners were cooked by us, on a rotation basis, for the whole group, and we had some good food on those nights – pasta and meaty sauces, chicken stew, beef stew.

Entertainment was sitting round the camp fire talking, listening to music, and watching the stars. One night we stayed in a hogan, “which is a bit like an igloo, but instead of snow is made of wood and mud, with a dirt floor. With a fire going, it’s actually warm and cozy, although very, very dusty”.

We had a couple of nights in Las Vegas, and spent our time looking at the hotel/casinos and their very extravagent displays at the front, involving water and battling pirate ships, or real fire to imitate a volcano. We went in the casinos, tried our hand at gambling, with varying amounts of success. Trips to bars/clubs were not a great success – ID’s were checked very carefully, and as I was underage at 20yrs old I couldn’t go in many. But, as I was with friends, on holiday I still enjoyed myself – and looking at the lights was free!

Eventually, we left the desert behind, and continued our trip east, to spend a few days in New Orleans. This was a pre-Hurricane Katrina New Orleans – I do sometimes wonder how much has it changed since then, due to Katrina. I liked New Orleans, and enjoyed my time there. Breakfast was eaten at Cafe-du-Monde, where we ate beignets (French doughnuts covered in icing sugar) everyday. We spent our time wandering around the French Quarter and Bourbon Street, soaking up the atmosphere, listening to jazz music at Preservation Hall, and eating spicy Creole food.

One day we went on a swamp tour, on a boat round the swamps. It “was led by a native of the area, who has used the swamps as a playground since he was a kid”. It was definitely interesting, and we saw several animals, such as alligators, snakes, turtles and of course the scenery, which was lovely.

From New Orleans, we began the long drive north, to Washington DC. We had a couple of days there, and despite having been before, I found new things to see, such as the Jefferson Memorial, and the FBI building tour – that has changed since 9/11; we just walked up and got in with no trouble and joined the next tour, these days you need to pre-book so they can do background checks. We also celebrated a birthday, and said our first goodbye as one of the group was leaving to return to Spain from DC.

From Washington DC we headed to New York, with a brief stop in Philadelphia.

We only had one night in New York City, and it was our last night together. John had a new trip starting the next day, and some of the group were heading for home in the morning. It was to become an emotional 24 hours as we said our goodbyes. Not all of us were leaving in the morning, myself and a few others had a few hours before we had to leave. We went out and saw some of New York, including The Statue of Liberty which we climbed up (although not to the top as we didn’t have time in the end to go all the way to the top). More tears and goodbyes followed at Penn Station, and then it was just me and Jo, heading back to Philadelphia.

And that’s the end of my year in America. An amazing, fabulous 13 month adventure.