In September 2014 I went to Iceland with a friend from Canada whom I had met a year earlier, on a group trip around the Balkans. I’d never thought about going to Iceland, in fact it had never really appealled, but when my friend messaged me in early 2014, and asked if I wanted to join her in Iceland, I thought, yeah alright. And, do you know what, I’m so glad I said yes – Iceland is a beautiful, stunning country, and I loved it there.

We only had a few days there, but it was enough to get a feel for the country. We stayed in Reykjavik, the capital, in a small hostel. Reykjavik was lovely, but it’s hard to believe it’s the capital – it was very quiet, no highrises, just beautiful clapboard houses. It has gorgeous views overlooking the harbour and the mountains surrounding the town, and almost felt rural. 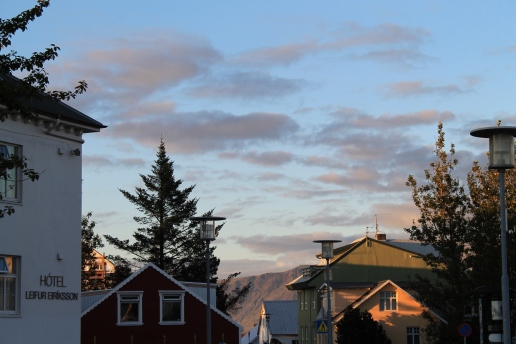 There are a few things which tourists do when they’re in Reykjavik, one of which is visit The Blue Lagoon – in fact some people stop there on their way to or from the airport. The Blue Lagoon is a man-made geothermic spa, created using water from a nearby powerplant. The water is always warm, and contains minerals which can help various skin conditions, and also help soften the skin. It was quite touristy, but we loved it. The warm water was lovely, there is a bar in the pool, so you have a drink without leaving the water. There are a couple of deposits of silica mud around the lagoon, which you can spread on your skin, and it really does help soften the skin – I tried it! It’s not really meant for swimming in, so you just wander around in the water, enjoying the warmth, and the views – it’s about 40 minutes drive from Reykjavik, so you have amazing views of the countryside. 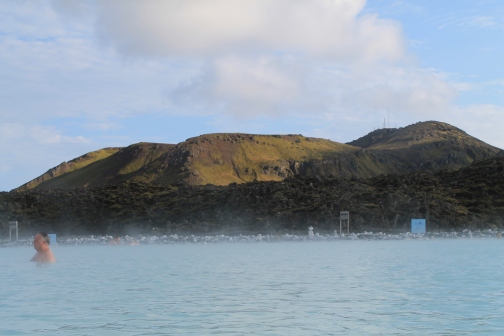 On our second full day there, I went on the Golden Circle Tour, which is also very popular with the tourists. This is a full day trip out into the countryside around Reykjavik. Our first stop was at Pingvellir National Park. There’s not much there for visitors, just a car park, but the scenery was lovely. Mountainous, green, rocky -an old lava field with steam rising in numerous places. Stunning! (The main picture at the top of this blog entry was taken in Pingvellir) From there we went to the visitors centre, which told us about the history of the area, and its importance in Icelandic history as 1000 years ago it was home to the Icelandic Parliament. And also the physical history, of the tectonic plates -this is the only place in the world where you can see a tectonc plate, the American plate, rising clifflike out of the ground. After that, we went to one of the highlights of the day – The Golden Waterfall. The Golden Waterfall was impressive. It’s white in colour, as it’s glacier-fed, and starts at the top of the hill, and falls and tumbles over a several of waterfalls, before arriving in the gorge below to continue on its way. Visitors are able to get quite close, as there are walkways, and steps to all levels, so you can really appreciate the size and scale of it, and the volume of water. 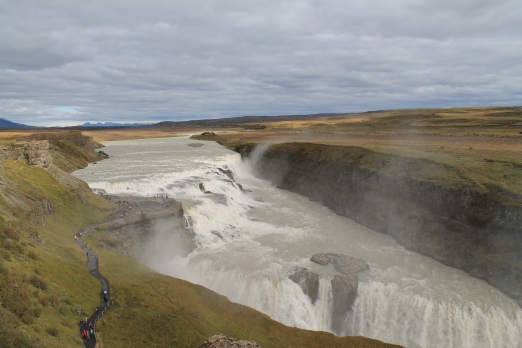 Nearby was an unexpected bonus – my first ever glacier! I was almost more fascinated by this than the waterfall. Sadly, we didn’t go near it, but it was close enough to see it, and with a decent lens on the camera I was able to get some good photos.

Our next stop was a geothermic area, full of geysirs of all sizes, some tiny, some big, all bubbling away or sending shoots boiling water into the air. There were also plumes of steam all over, and a strong smell of sulphar – which is a widespread occurance in Iceland. 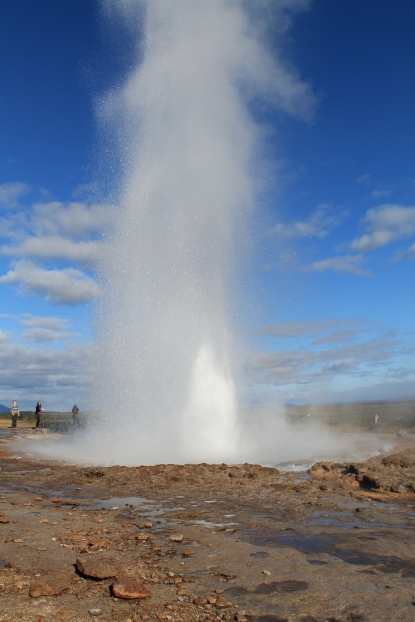 When I returned to Reykjavik that evening, I had a wander around the town, and went into the Hallgrimskirkya church, which was looking gorgeous in the evening sun, and with a choir singing inside it was a lovely, almost magical end to the day. 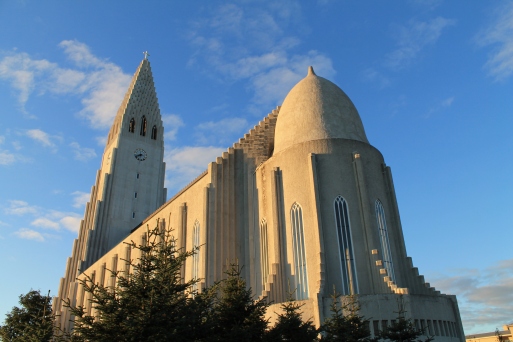 The next day, I went on another day trip out of Reykjavik to see more of the country. On this trip we saw another glacier, although this time we were almost close enough to touch it, as we walked along a path next to it for about 30 minutes. It was impressive. I had never realised before that a glacier is dirty – from a distance they appear clean and white,but this one wasn’t -it was dirty, like old snow. It also isn’t smooth, but lumpy and bumpy, full of crevices and dips. 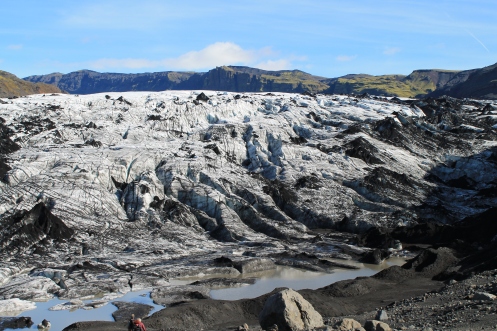 From there we went to a small town called Vik, and its black sandy beach. This was probably the highlight of the day for me, as the sun was shining, and the beach was lovely and quiet, and unspoilt. We looked at some rock formations, called Reynisdrangar, which was were impressive, and afterwards had lunch. While the rest of the coach (none of whom I knew) had lunch at a cafe in the village, I went for a quiet walk and lunch on the beach. It wasn’t sunbathing weather, but I loved that time to myself, to admire the stunning views. 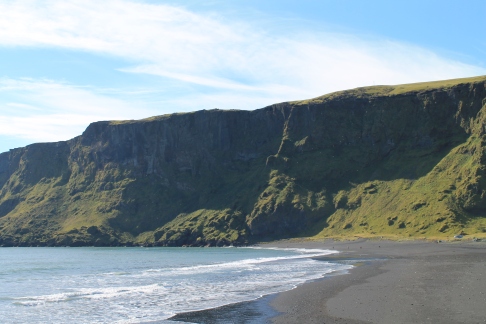 Our next stop appealed to the history buff in me – The Skogar Folk Museum. This is a small museum set up by one man, in response to the rapid spread of technology in Iceland. It is essentially a new home for lots of now old/unused items from people’s home, dating from the days, not too long ago when Icelandic people, especially those in the country, lived in turf houses, and re-used the same traditional items for farming and fishing, and often used the limited resources, such as driftwood, around them to create more when they needed them. He saw it as a way of preserving a way of life. The result is a small, but very interesting museum full of everyday items, clothes, toys, household items, fishing and farming equipment. There are also a number of turf houses which visitors can look at, and try to understand life in those days, of living in a one-roomed house, with no electricity, and no privacy.

From there, we went to our last 2 stops of the day, at 2 waterfalls. The first was the Skogafoss waterfall, where the water falls from the cliff top overhead to the ground 60m below. It was impressive, no gentle tumbling like at The Golden Waterfall, here the water just drops. The other waterfall was the Seljalandsfoss, which gives the visitor a rare opportunity to walk behind a waterfall. There is a rocky platform behind the water, which is easily accessible from dry ground, and you can go behind it. 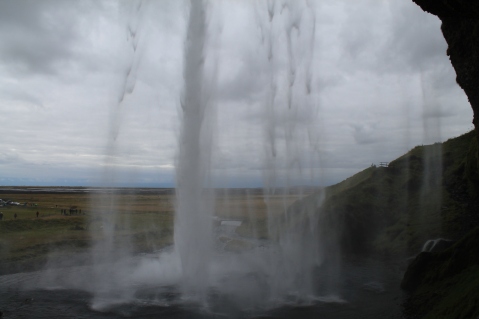 The last day, I just wandered aimlessly around Reykjavik for few hours until it was time to catch my flight home, admiring the quiet capital city, and dreaming of living in one of the many lovely houses I saw. 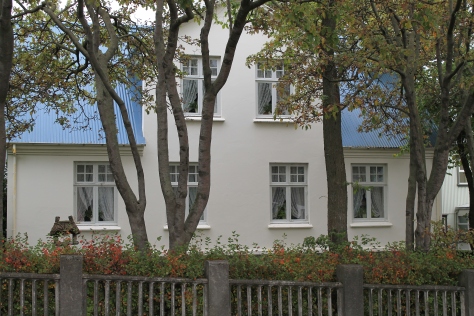