Sadly, due to a streaming cold it wasn’t my most successful holiday ever. I spent most days too tired to do much, and my snotty nose made sleep a challenge. But, I enjoyed what I did manage to do, and I did like Luxembourg.

My first day was Sunday, which dawned cool and misty. Autumn has arrived in Luxembourg and the leaves on the trees are beginning to change colour to the gorgeous oranges and yellows we all love in autumn, and although misty it was a nice start to my trip. 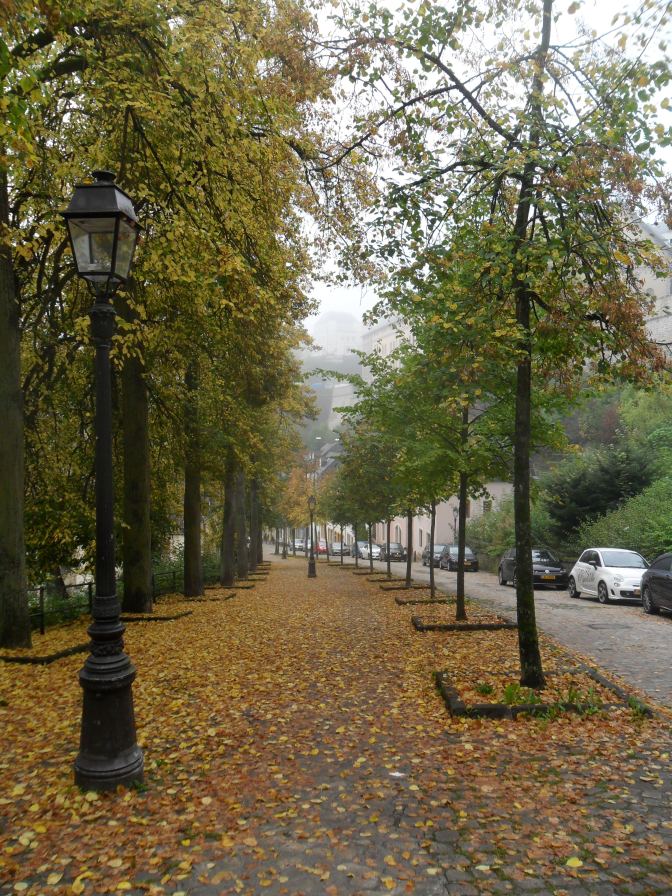 I was staying in the only hostel in town, which lies in the valley – Luxembourg City is built in a narrow valley, and on the cliff tops, and also in places on the cliffs themselves. Accessing these different areas involves going up/down some quite steep paths and roads. That first morning I took what I later realised was the long way into the historic centre, but as I walked up the path I had some lovely views of the valley, with autumnal colours on the trees and mist across the distant rooftops. 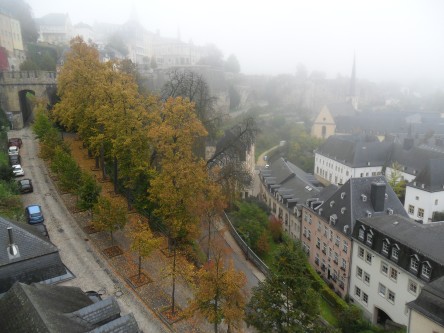 My first stop was the information centre, where I got a copy of a map with the directions for a self guided walk around town, which was a good way to see the main sights. As I walked I saw old churches such as the Notre Dame Cathedral  and St Michaels’s Church, various squares and plazas including Place d’Armes and Place Guillaume, more views from the old underground fort defences known as the Bock Casemates. In all, included a stop for lunch, it took about 4 hrs to do the walk. Along the way I stopped to take photos, and look and admire the buildings. Sadly by about 3pm I was feeling very tired  (the start of my cold, I think) and I headed back to the hostel for a rest. That was actually the last thing I did that day, except go out for dinner. 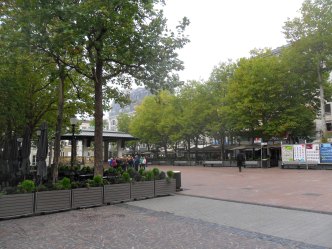 The next day, Monday, I went back out to see more of the city. My first stop was the Bock Casemates. They are the old fortress, built into the rocky cliffs overlooking the lower city. They haven’t been used defensively for decades and are now open to the public and considered one of the major sights in the city – and one the very few museums open in Luxembourg open on Mondays. In addition to seeing the tunnels and caves/rooms used by the soldiers they also offer more lovely views of the valley. There are no boards around to tell visitors anything, you just have to wander around and use your imagination. 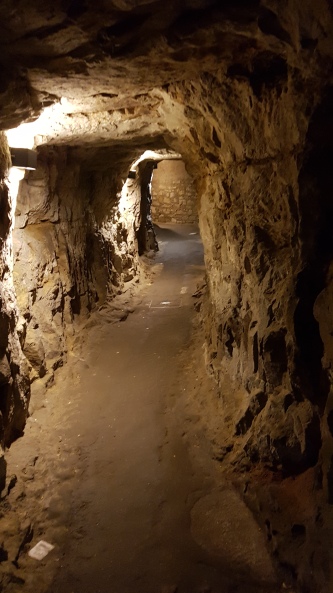 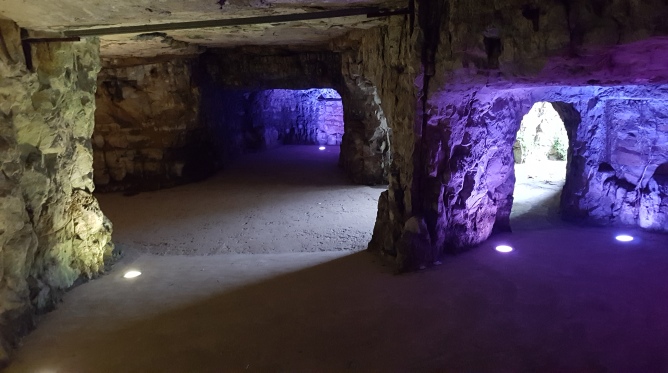 From there I headed back into town, and had a walk around, in the rain. By pure chance I found myself in the municipal park, which looked lovely, but in the pouring rain was a less than enticing place to spend too much time – although I did see my first red squirrel (squirrels in the UK are mostly grey). As I wandered around the park I stumbled upon an art galley, the Villa Vauban. Villa Vauban is actually the name of the grand old villa which houses the art gallery, and was a gorgeous old building, with high ceilings and ornate cornices, and beautiful big doors and windows. I’m not particularly into art and galleries, I much prefer photos and historical museums, but due to the rain, my impending cold which was making me very tired again, and the fact it was free I went in. It was only small, but I actually enjoyed it. Some of the pictures on display were actually photos, which probably helped, but even some of the paintings and portraits were lovely to see.

My plan after that had been to head to another museum, but on the way there, via the shops, I realised it was shut. Most museums in Luxembourg seem to shut on Mondays, which is very frustrating. At that point, I gave into the brewing cold, and after a wander round the shops I headed back to the hostel, feeling absolutely wiped out, despite it only being about 3pm.

The next day, I headed out on a day trip – more on that in my next (see blog post Vianden, Luxembourg) blog post.

My final day was Wednesday. I had an evening flight booked, so my plan had been to fill my day with sightseeing and museums and doing as much as possible. Sadly, it as not to be. My cold had kicked in by this time, and I was quite snotty and unwell, and still tired. In the morning I went to the Museum of the History of Luxembourg City, which I found really interesting. It tells the history of the city, from its humble beginnings as a fort, way back in 963, and its subsequent growth. Due its location, the country and the city were occupied and ruled over by a variety of European powers over the centuries, before gaining independence in the 19th century. The museum also talks about life in the city specifically, and about the growth and demise of various trades and unions, and the growth of the middle class, the increasing legislation to protect children and ensure they went to school  – themes common across much of Europe at about the same time.  And of course the recent past, and its importance in the growth of the EU. The display boards were in French, German and English, well written and well illustrated. I probably spent about 3 hours there. Call me a history geek, but I liked this museum.

I had planned to go to another museum after lunch, but I was far too tired. I ended up in the Petrusse Valley, which is a gorge at one end of the city, and is a lovely, beautiful big park to spend a few hours, wandering around beneath the trees, enjoying the sights and sounds of nature, right in the city. Well, assuming you’re well enough to wander around anyway. I just sat on a bench and enjoyed the sights and sounds of nature from there.

I headed to the airport far earlier than I needed to, due to fatigue and lack of energy for anything else. A word to the wise – don’t fly when you have a snotty cold and a blocked nose – it’s virtually impossible to get your ears to pop as the plane goes up or down, and it will really hurt when you try. Let’s just say, that was a hard flight home, despite being barely an hour long.

Despite the cold, I did enjoy Luxembourg.  The city is lovely, full of nice squares, and beautiful buildings, and cobbled streets, and views. What I saw of the rest of the country was also beautiful.