Yesterday I returned from my first trip to Berlin. It was another cheap holiday – cheap flights with Ryanair, and 4 nights in a hostel. Not a luxurious holiday or the trip of a lifetime, but nevertheless somewhere I was interested in going to. Some people go to Berlin for the clubs – not me. I went for the history. Twentieth century history is something that has interested me since I studied it at school for my GCSE’s, and let’s face it, German 20th century history is fascinating. The end of the Imperialist era and the rise of the Weimar republic, the impact of the Wall Street Crash, which hit Germany hard, the subsequent rise of Hitler and the Nazis, WW2, and the following division of Germany and Berlin into 2 countries.

The first evening was cold, and wet. It was enough to make me wish I was at home – not in a homesick way, just in a ‘I wish I was in the warmth of home and not having to go out for my dinner’ way. However, I found a small restaurant near the hostel, Vision Burger, which did very good burgers and fries. Worth going out in the rain for!

The next morning was still cold, and very overcast, but fortunately it had stopped raining. My first destination was the Brandenburg Gate and the Reichstag. The Brandenburg Gate was built in the 18th century on the orders of Frederick William II. It’s at the entry to Unter den Linden, the linden tree-lined street which led to the royal City Palaces. It survived WWII, although it was heavily damaged, and then found itself in East Berlin, on frontline of the border between East and West Berlin as the Wall was built just metres from it. The Brandenburg Gate was finally restored in 2000 after a poor repair after the war, and today is an impressive structure. It’s one of the top places to visit in Berlin, and even in January was busy with tourists taking photos and selfies. It’s located in Pariser Platz, which a mostly pedestrianised square, and these days no traffic can pass through the gate. 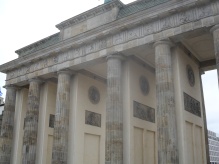 From there I went to the Reichstag, which is the German parliament building, just a few minutes walk from the Brandenburg Gate. This is another impressive building, built in the late 1800’s. It was used as the parliament building  from the time it was built until 1933 when it was badly burnt in a fire of still unknown causes. It was then heavily damaged in the war, and not repaired for many years. After the division of Berlin and the building of the wall, it was located in the West, but as the West German capital was then located in Bonn it wasn’t used by parliament until after re-unification in 1989. Today, it is a grand, imposing building but I liked it. 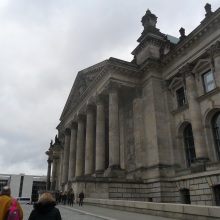 It is also possible for tourists to go and visit it. One way is to go on a tour of the building, but I didn’t do this as it needs arranging in advance. But, what I did do was go up to the Glass Dome, located on the roof. This can be organised on the day, although you will need your passport and it’s unlikely you’ll go straight in – you’ll probably be given a timeslot for later that day. So, at about 10am I was booked in for 12:30.

This gave me a couple of hours free to do something else. So, I went to the Holocaust Memorial, which a few minutes walk away from the Reichstag. This a not a traditional memorial, ie a wall or monument or plague with the names of the dead, but rather a large collection of large concrete slabs arranged in rows. They start off at barely knee height and then as you walk through them the ground slopes slightly, and they get taller until they are above your head. It was peaceful place to spend some time in quiet reflection. There is also a museum there, but I didn’t go inside, although it is meant to be very good and very informative.

After that, as I still had time before my Reichstag visit, I went for a wander down Unter den Linden. I had heard it was a lovely street to see, as it is a wide street with a pedestrian area in the middle lined with linden trees. Well, sadly I was disappointed. I guess January is the wrong time to visit. The trees were bare (and there aren’t as many of them as years ago), there is a building site in the middle of the road right next to the pedestrian area, and with  the traffic on either side it just felt like a normal road, nothing special. I did find some nice looking buildings as I walked down it though, so not a  complete let down. 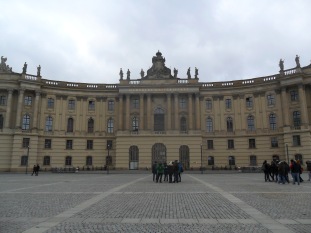 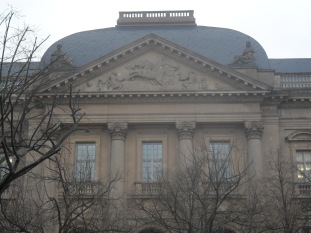 After that I went back to the Reichstag for my visit. After going through airport style security I was in. A few years ago, a glass dome was built on the roof of the Reichstag, which is supposed to offer good views of the city. It’s also free, always good. Again, sadly I was slightly disappointed. I actually thought the best views were from the roof terrace itself, although in the eye-watering wind this was not a place to spend much time. The dome itself has 2 walkways for going up and down – one in each direction, and they are on the immediate inside of the dome. If it’s not too busy you can probably stop on the walkways to admire the view, but it was busy when I went, which made stopping hard as you’re just in the way of the crowds. At the top, there is a decent sized area for standing and looking out, but the walkways are between you and view making it a little difficult to see. When I was there it was also very busy, full of noisy teenagers – things improved when they left. At the bottom of the walkways there are a number of information boards giving a brief history of the Reichstag building. 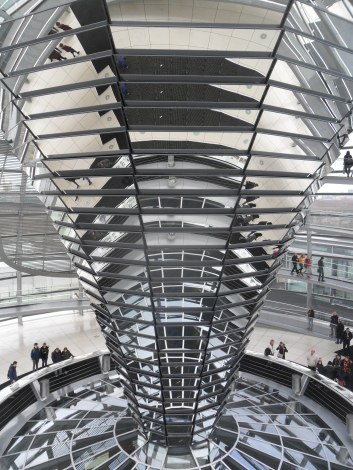 After I left the glass dome, I had a late lunch, and then headed to Checkpoint Charlie. On the way, I got slightly distracted when I saw a few pieces of the wall still standing with some info boards. Most the wall was torn down as quickly as possible after it stopped being a border, but in a few areas a few sections were saved and are now used as memorials and history exhibits. 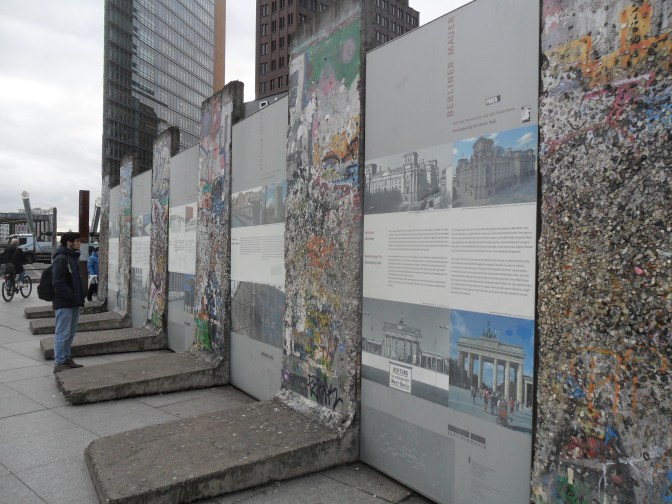 Checkpoint Charlie was one of the border crossings between the American sector of Berlin and the Russian sector, ie between East and West. It is now a popular tourist spot, as the guardroom still stands, and a sign warning people they are leaving the American sector is still in place. There is also a museum there, which I went into. It was very interesting museum to visit as it tells the stories of some of the people who tried to escape from East Berlin, and the effort they put in. Some of them in hid in cars, in tiny cramped compartments, others dug tunnels. It was slight information overload though, as there are a lot of displays.

After that I headed back to the hostel for much needed sit down/rest.